The Community Garden is located on the Presbyterian Church property near the corner of Boones Ferry and 214 across the street from French Prairie Middle School. Volunteers come together to grow fresh food to be donated to the Food Bank. Garden plots are also available for groups and individuals. Please email Rev. Cynthia O’Brien at revcynthiaobrien (at) gmail.com to express interest, or stop by the church on Sundays at 12:30 and chat with folks during our coffee time. 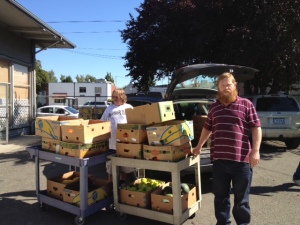 Above is one of our deliveries to the food bank. 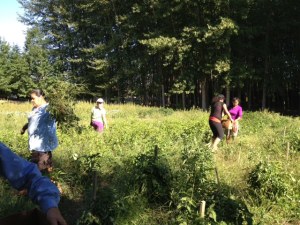 Above are Monday morning volunteers harvesting and weeding. 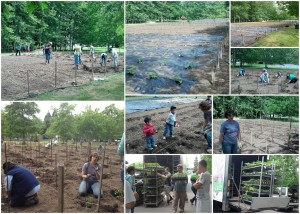 Sample Community Garden Updates from 2014 when we were blogging…

September 2014  We had 20 boy scouts and their parents harvest on the 11th.  They  picked 350 pounds; peppers, tomatoes, broccoli, squash and cucumbers.  Individual volunteers continue to work on the garden and pick corn and tomatoes. 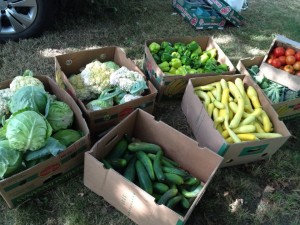 Our garden has reached the major-production phase.  The food we are churning out is beautiful.  We have cabbage, cauliflower, broccoli, yellow summer squash, cucumbers, sweet and hot peppers, tomatoes and beans.   The photo above doesn’t include the beans, but last Monday we picked two of these large boxes full of beans!!

To keep up with this bounty we have scheduled weekly harvest gatherings.  Monday mornings at 8:00 a.m., folks are  gathering to pick vegetables and enjoy the community.  Adults and children are participating.  It is a fun time.

The delivery to the food bank is also a treat.  The staff there are so amazed and grateful.  They take our boxes into their pantry and distribute  it to  hungry individuals and families.

We grew, harvested and delivered 4,980 pounds of food to Woodburn’s Aware Food Bank in 2014.

Working Together to Feed Woodburn

By Rev. David Morelli, former pastor of the First Presbyterian Church in Woodburn

There is a story that circulates in my preaching journals from time to time illustrating the difference between heaven and hell. Both ‘places’ had a large banquet table with all the food one could imagine.

In the ‘down’ place people were hungry, wailing and crying, though all this food was set before them. The problem: Each person had a spoon with a handle so long that they could take the food from the platter, but they could not get it into their mouth.

At the ‘up’ place there was a table set, all the food one could imagine, and each person had a spoon with a handle so long that they could not put the food in their mouth.

The difference between heaven and hell: In heaven people were working together feeding each other.

The community garden at the Presbyterian Church on Boones Ferry Road is an example of working together to feed each other.

Now in its fourth year the origins are starting to fade and I would like to share the beginnings of this community garden on Boones Ferry Road.

It began like this. Beth Balaban, the meal site coordinator who uses the church for Meals on Wheels, approached me to ask if the church would allow them to use some of the property for a garden. A small plot was tilled and planted inside the fence in the back of the church.

The next year we decided to expand the garden to the property east of the north parking lot. This was a little less than an acre and seemed overwhelming. How were we going to handle those long handled spoons?

I received a call from Janet, of the Marion-Polk Food Share in Salem, who had heard we might have a garden and she said if the church provided the property, she would get the people to help. We scheduled a meeting and she delivered as promised.

Warde Hershberger, then coordinator of the AWARE Food Bank, Ian Niktab, the current coordinator of the community gardens in Woodburn, Jack from Al’s Garden Center, Nanette Shepherd and others from the Woodburn Church of Jesus Christ of Latter-day Saints, Dalila Ortiz, who was then working for Neuvo Amanecer, Pastor Edy from the Hispanic church, and Jerry Yoder from the Presbyterian Church were all present at this meeting.

We developed an action plan. The land was to be divided with half the property for the community garden and half the property divided into 30 plots, 8 feet by 17 feet for individual families. Warde Hershberger contacted Woodburn Landscaping, which laid 400 feet of irrigation pipe. Warde also plowed the field. Wilbur Ellis and Coelho Dairy provided fertilizer and Al’s Garden donated the plants. When it came time to plant, members of the LDS church were there in large numbers. Also giving a helping hand were members of the Hispanic church, Presbyterian Church and those named above from the original committee.

As the summer went by and the weeds grew alongside the plants the majority of the ‘caretaking’ was done by the LDS church and a select few people who would come and weed.

As the various plants were ready for harvest, Nanette Shepherd led the group in harvesting the garden. This past year three people not mentioned above made it possible to keep up with the weeds and the harvest. The past two years Dean Herndon, contacted through the meal site, took a personal interest in the garden, and he, along with Nanette, took the lead in weeding and harvesting the garden. Helen Abel, also from the meal site, was another garden angel who took special care of the onions this year, and, Don Fackrell took time during his lunch hour every day to come and weed the garden. At harvest, those long handled spoons reached out to the food bank with more than 3,000 pounds of produce. This year, more 3,500 pounds was delivered to the food bank.